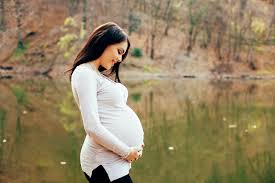 Pregnancy is a very pleasing event, however, it brings about a lot of changes. A hormonal “waterfall” takes place, that has an impact to the pregnant woman’s psychology and body.

What is the “gestational gingivitis”?

Very often, future mothers experience bleeding in their teeth during their brushing, as well as edematous (swollen), soft, red gums and a movement of their teeth, while pain and malodor may also exist. Furthermore, locally at the borders of the gums, can be observed small lumps (tumors), the “pregnancy epulides”. This is the so-called “gestational or pregnancy gingivitis” with phases of intensification and remission throughout all the pregnancy period; the peak of these effects can be observed principally in the 2nd trimester and regards almost 50% of pregnant women. The symptoms tend to cease after the delivery and the breastfeeding period.

During pregnancy there is a rapid increase in progesterone and estrogen levels (approximately 20 times higher, on average, than the levels of the menstrual cycle). An increase of vascular permeability can be observed, as there is an interaction between the function of the vascular wall and hormone levels. The area of the mucosa is characterized by a multitude of small, capillary vessels. Therefore, the intense red color of the gums of the oral and jaw area is fully justified.

Does the hormonal imbalance during pregnancy play a role in the oral cavity?

The hormonal imbalance has an impact, both on the structural characteristics of the vessels and on the immunological response mechanism of the host against various inflammatory diseases. Periodontitis is a chronic gram-negative inflammatory disease. During pregnancy the production of various regulatory agents of response to an impending infection (the “intermediaries” of the inflammation, such as the prostaglandins, the interleukin, etc.) is activated.

These substances, determine the action of the neutrophil defense cells against the periodontal pathogenic microorganisms. In fact, the sensitivity of the defense mechanism against a microbial or bacterial infection is increased. This is denoted by the increase of the inflammatory indices in the systemic circulations, as the c-reactive protein. For this reason an intense clinical picture is observed, even in the case of incomplete presence of a local microbial agent.

The pregnancy epulides are completely benign, spherical tumors. A local irritant agent, such as a sharp, botched prosthetic work or calculus, for reasons that are so far obscure, initially causes swelling and then proliferation of the cells of the interdental papilla so that the final formation of the epulides takes place. Their composition changes progressively, they become moderately hard, bleed easily, can become pedunculated and cover the teeth surface. They can more frequently occur at the upper jaw and usually disappear after the end of pregnancy or are removed at that time, because they can relapse, unless there is a serious aesthetic reason.

For the development of pregnancy gingivitis and epulides, there must be a local microbial agent. As sensitivity against periodontal pathogenic microorganisms is increased, the same happens in the case of cariogenic affection.

It is worth remarking that research that correlates periodontitis with the outcome of pregnancy, as an independent risk factor, has taken place. It has been proved that, in pregnant women with periodontitis, there is a 2 to 7 times higher risk of premature birth or of an underweight newborn. It has been proved that the embryo can be infected by hematogenous dissemination, through the placenta, by specific microorganisms of the periodontal pockets, while specific periodontological-embryonic mechanisms have been also identified.

How important is the dental examination during pregnancy?

In cases of programmed pregnancy, the detailed dental-periodontological examination must be included as part of the prenatal checkup, according to the American Association of Periodontology.

Pregnancy is often blamed for the loss of teeth, or wear of the enamel. It is erroneously believed, that the fetus absorbs calcium from the teeth in order to be developed. Needs in calcium are covered by the daily food intake. In cases that the needs are not covered, the calcium reserves of the bones are used or various nutritional supplements are administered.

During pregnancy the removal of calculus (cleaning) and the polishing of teeth can be performed anytime. There are contradictory views regarding the rest of dental works. High caution is recommended during the 1st trimester, when the organogenesis takes place, as well as in the 3d trimester, when the possible administration of tetracyclines may cause the characteristic discoloration of the child’s teeth. Acute cases must necessarily be immediately treated regardless of the stage of pregnancy, but if the treatment can be programmed, the safe 2nd trimester must be preferred.

Do dental X-rays and anesthesia affect the pregnant woman and the fetus?

There are contradicted views regarding taking X-rays and anesthesia, with or without the use of epinephrine. In order to cause congenital anomalies, the overall radiation dose must exceed 5-10 cG. When periapical X-rays of an entire dentition are taken,14 in total, with a protective lead apron, the dose does not exceed 0.00001 cG. The dose is reduced even more with the use of modern digital equipment, high speed films, the long cone technique and the high power X-rays. Anesthesia in dentistry is local without any effect to the central nervous system. The role of epinephrine is to achieve an anesthesia of a longer duration and of a greater depth, which means painless dental work, as it causes a contraction of the smooth muscles, an increase of the peripheral resistances and of blood pressure, so that the local character of the anesthesia is maintained. Therefore, when a strict protocol is followed and there is the necessity of diagnosis and treatment, taking X-rays and anesthesia can be performed with absolute safety for the pregnant woman and the embryo.

How important is the cooperation between the Gynecologist and the Dentist?

It is important to remark the necessity of cooperation between the doctors, to the benefit of the patient. Although preparations such as penicillin or cephalosporin or the analgesic acetaminophen are completely safe, the gynecologist must agree regarding their use, as well as regarding the treatment plan.

What is the role of prevention in pregnancy for good oral hygiene?

The role of prevention is very important. There is no clinical manifestation if there is no local agent, either irritant or microbial. Before pregnancy, other caries and inflammation foci, either in the oral or in the jawbone, caused by odontogenic periapical lesions, must be treated radically and on time. It is necessary that the future mother exercises in oral hygiene and particularly in the intradental cleaning, and its significance must be well pointed out. Often, bleeding and pain during the brushing of teeth, act as inhibitory factors in observing oral hygiene. Thus, a vicious cycle is created, due to the continuous accumulation of dental bacterial plaque and its lack of mechanical removal with the use of a toothbrush and dental floss or of the intradental brush, deteriorating thus the clinical picture.

What must pregnant women do, so that they have a healthy mouth?

Pregnant women must thoroughly wash their teeth and perform an intradental cleaning on a daily basis. It is allowed to use mouth wash or lukewarm chamomile tea for the relief of the irritated gums. After the morning sickness, when the gastric acid has already affected the enamel, it is recommended first to wash the mouth thoroughly with water and then, after 1 hour, to brush the teeth so that the pH is stabilized. Acids tend to cause corrosion to the dental tissues.

Finally, it must be mentioned that the best treatment is achieved by prevention, and the unhindered relationship between the future mother-pregnant woman and her dentist. A regular checkup, a prompt diagnosis, without the anxiety of an acute case and an immediate treatment can have the optimal long-term results, to the benefit of the patient.