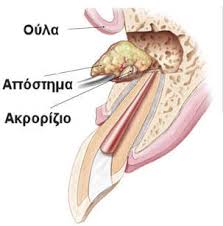 WHAT IS AN ABSCESS?

Abscess is a collection of pus localized within the tissues, which is formed by the action of pathogens, pyogenic microorganisms, such as staphylococci and streptococci.

What kind of abscesses are there?

1)The apical abscess is a purulent, exudative collection in the interior or around the root of a tooth which, depending on its chronicity, can be painful and/or symptomatic. It is formed when the pulp, that is the soft tissue that exists in the interior of the root canal, dies, gets infected and remains untreated and the infection expands to the periapical tissues, that is to the tissues around the root of the tooth. The most common symptom is a pain in the bone around the tooth, but it can also occur as pain during chewing, gum swelling, sensitivity and discomfort to a hot or cold stimulus, sensitivity on palpation. The abscess goes through some stages until it matures, initially having a moderately hard composition, then a fluctuant composition and finally it is drained via a fistula that can be usually met in the gingivobuccal /gingivolabial sulcus.

The acute phase of the abscess occurs when the bacteria or the bacterial toxins that infect the root canal of the tooth’s root exit from the apical area (the hole at the lower edge of the root which is the exit point of the blood vessels and the nerves of the tooth) and infect the surrounding periapical tissues. The pain is very intense and pulsatile and many times the consumption of a cold or frozen beverage is relieving. At this stage the formation of pus begins and at the final stages general symptoms may be observed, such as fever, exobuccal edema, while the swelling that the abscess has caused is soft and fluctuant and at this time the abscess must be broken. There is however the case of chronic apical abscess, when the patient complains about a periodical mild pain where the presence of a fistula that looks like a “pimple on the gums”, often consists the unique symptom, while clinically and through the use of X-rays deep dental caries can be found under old fillings or botched prosthetic dental works.

2) Periodontal abscess is the type of abscess that this time occurs in the tissues that surround the tooth and, more particularly, in the pocket between the tooth and the gum the so-called periodontal pocket, as it can occur to patients with periodontal disease. The infection may occur after a piece of food or even calculus is stuck and, as the inflammation cannot be drained, pus is formed. If at this phase the inflammation is not treated,  it can expand apically and even infect the nerve from the tooth apex, following an inverse course than the one of the apical abscess. These lesions are called endo-periodontal lesions. The treatment consists in the deep curettage of the infected pocket by the dentist and, of course, the thorough oral hygiene performed by the patient.

3) Pericoronitis is a special form of periodontal abscess which is formed by the collection of pus, food residues and bacterial plaque at the operculum, that is at the part of the gum that covers a semi-impacted third molar (wisdom tooth). The operculum is inflamed, the patient cannot brush this particular area, and there is also malodor or even difficulty in swallowing food. It is treated either by the extraction of the third molar, or by the excision of the operculum with the use of a dental laser, rinsing of the area with chlorhexidine and, of course, excellent oral hygiene practices observed by the patient.

How is an abscess diagnosed?

Apart from taking a periapical X-ray, the dentist performs a percussion test to the tooth he suspects it is responsible for the problem. The tooth that has the abscess, is the tooth that will react more intensely that the other ones in this procedure, and the dentist will also ask you if the pain becomes more intense when you bite or chew.

How is an abscess cured?

The treatment varies, depending on what caused the abscess. Generally, the abscess must be drained, either by breaking it, where the endodontist (specialist in root canal treatment) either makes a small hole in the gum so that the trapped pus can be liberated, along with the endodontic treatment, or extracts the tooth if the tooth’s damage is terminal. In modern dentistry, the extraction of a tooth is used as a last resort and the gap that is created by the extraction is covered with the use either of a dental implant, or of a bridge.

By the root canal treatment (resection) after adequate anesthesia has been performed, the endodontist will remove the bacteria and their toxins from the interior of the root canal with the proper tools and sterilizing medicines, will clean the walls and fill hermetically lengthwise and widthwise the root canal of the tooth.

Unlike other types of abscesses, dental abscesses will not be overcome if the endodontist does not intervene. Antibiotics and painkillers-anti-inflammatory medicines cannot heal an abscess by themselves, but rather reduce the intensity of the symptoms the abscess causes. It would be better if you did not postpone the visit to your dentist because it is possible that you will lose the chance to save your tooth and then it will be too late. It is also very important that a re-examination of teeth that have been cured of abscess is performed every 1-2 years, so that it can be ascertained that their healing is excellent. A relapse may occur if there exists a lengthwise root fracture, with the existence, at the same time, of a periodontal disease and a large pocket at this spot or even if the sinus is perforated at the upper jaw (maxilla) when the abscess is quite widespread.

What are the complications occurring from a dental abscess?

Most of the complications occur when we neglect treating an abscess in our mouth and thus, the bacteria that exist in it are spread to the surrounding tissues. Thus, a tooth extraction may be finally necessary, sinusitis may occur when there is an abscess in the teeth of the upper jaw, osteomyelitis may occur, etc.

What causes an abscess?

The abscess is caused by pathogenic bacteria and their derivatives that exist in teeth with dental caries. The variety and strength of the bacteria as well as the capacity of defense of the human body determine the intensity and the extent of the inflammation.

The bacterial infection causes the inflammation and finally the death of the pulp’s tissues and continues spreading through the root canals to the bone around the root of the tooth, gradually forming the apical abscess. Apart from dental caries, the abscess can be caused by a crack on the tooth, or a defective filling, or a defective botched prosthetic restoration.

The pus that is collected consists of dead cells and bacteria and is the outcome of the “battle” of the human body against the pathogenic microorganisms.

What should I be careful of, so that I don’t get an abscess?